skip to main | skip to sidebar

Against The Giants, Part II

As promised, I'm back. The image hosting issues have been thankfully resolved, so here is part deux of Against The Giants (on the cheap).

After the Steading of the Hill Giant Chief, intrepid heroes who survive are expected to take on frost giants (and yetis, and white dragons, and a remorhaz) in the Glacial Rift of the Frost Giant Jarl. I had an ancient Ral Partha frost giant, at this point about 15 years in my possession. It was sculpted in Ye Olde Days of true 25mm, and whilst a bit old and clunky, I really liked it. I've stripped it and repainted it twice, always with blue skin and blonde hair. Still, I'd need more than that. Surfing the web, I came across a Russian company called Tehnolog. You can get some of their stuff on eBay, for what seems like pennies, especially if you're a hardened war gamer. They had some promising 54mm figures (1/32 if you cut your teeth on old Airfix). Cost including shipping came to roughly £1 per figure, which was exceptionally reasonable. I ordered some to use for both frost (Vikings) and fire (undead and paladins) giants. Allowing 6-8 weeks for delivery, this is what I got: 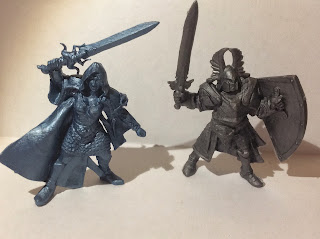 Whereas they won't win any prizes, and they have the occasional ejection pin marking, they are highly serviceable. The Vikings soon got based, primed and block-painted. This is what they look like: 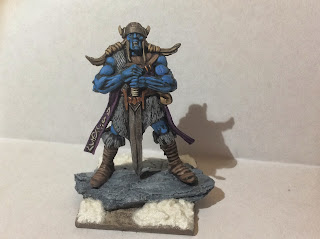 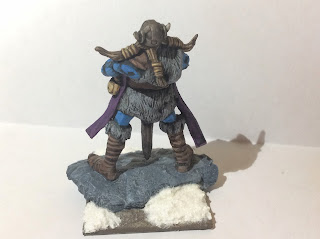 They most definitely look the part. There is a Varangian set available as well, and that should give me enough miniatures and poses. Let's face it, if the players are facing more than 10 frost giants a time, it usually results to lots of Wish and Raise Dead spells. In other words, It Does Not End Well (and I know at least one reader of this blog who will get this reference).

Defeat of the Jarl gives the players the opportunity to travel to the Hall of the Fire Giant King. The fire giants needed some more work; namely beards. I've only finished one, as a proof of concept. I originally dallied with the idea of painting them red-skinned and black-bearded, like the fire giants in the Rules Cyclopedia. I went with the classic AD&D black skin and fiery beard instead. Why mess with perfection? 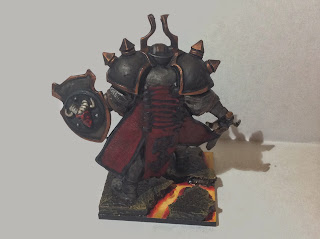 Ok, my lava painting skills leave much to be desired, but these are impressive miniatures. How do they scale up? Pretty darn well. 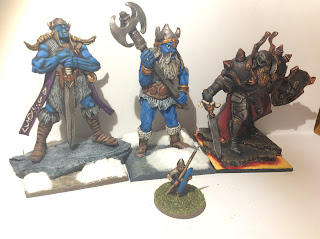 They even scale up well to my old Ral Partha figure, which works well for 15mm.

So, is that all? Yes for now. There are lots of other giant-kin seen in the G1-3 series. Cloud and stone giants, even a Titan. There are female giants as well; some of the Tehnolog sets include females that can be utilised. The only other giant I could find was an ettin. Actually two, a Reaper Bones one, and a MageKnight one. 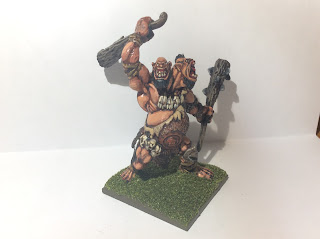 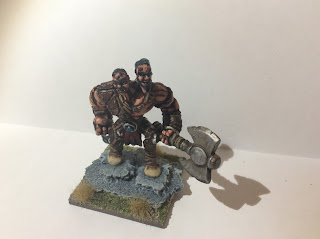 Both look the part, and I'm happy with them. I also did myself a small conversion of one of the least known kinds of giants, using two MageKnight minis and lots of green stuff. I really liked the athach from Rules Cyclopedia, so here is my 15mm rendition of one: 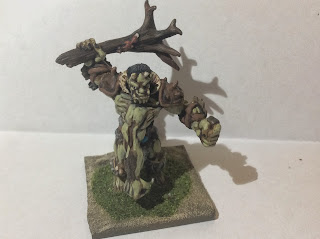 Greek_Geek
I'm an overworked and underpaid dentist. I build models and wargame as a means to maintain my sanity.